Bannon, in the Dog House and Desperate to Recover, Says His Support for Trump Is ‘Unwavering’

Steve Bannon has issued a statement of regret, but not an apology. Indeed, the words “sorry” or “apologize” don’t appear in the statement. The Breitbart publisher who was interviewed multiple times and spoke very freely to Michael Wolff when he was the Trump White House Chief Strategist has lost his top financial backer and the support and friendship of the president after remarks he made centered prominently inÂ “Fire and Fury: Inside the Trump White House.”

Axios’ @mikeallen on CBS with an exclusive statement from Steve Bannon, in which he expresses “regret” over his comments about the president’s son.

Bannon is also praising Donald Trump Jr. in a new statement given exclusively to Axios.

“Donald Trump, Jr. is both a patriot and a good man. He has been relentless in his advocacy for his father and the agenda that has helped turn our country around,” Bannon’s statement says.Â

Bannon’s statement says his comments about Donald Trump Jr’s meeting with the Russians, which he called “treasonous” and “unpatriotic,” were not about Don Jr. but about Paul Manafort.

Bannon had told Wolff,Â “Theyâ€™re going to crack Don Junior like an egg on national TV,'” so his new statement is inconsistent with his remarks to Wolff.Â

He also says in the book,Â â€œThe chance that Don Jr. did not walk these jumos up to his fatherâ€™s office on the twenty-sixth floor is zero.â€

“There was no collusion and the investigation is a witch hunt,”Â BannonÂ continues, using theÂ exactÂ same words Trump has to describe them. The investigation has already produced a two guilty pleas and two other indictments.

“My support is also unwavering for the president and his agendaÂ â€”Â as I have shown daily in my national radio broadcasts, on the pages of Breitbart News and in speeches and appearances from Tokyo and Hong Kong to Arizona and Alabama.”

Indeed, Breitbart, which Bannon has called the “platform for the alt-right,” is also once again the Trump News Network. Here’s the front page as it appears right now: 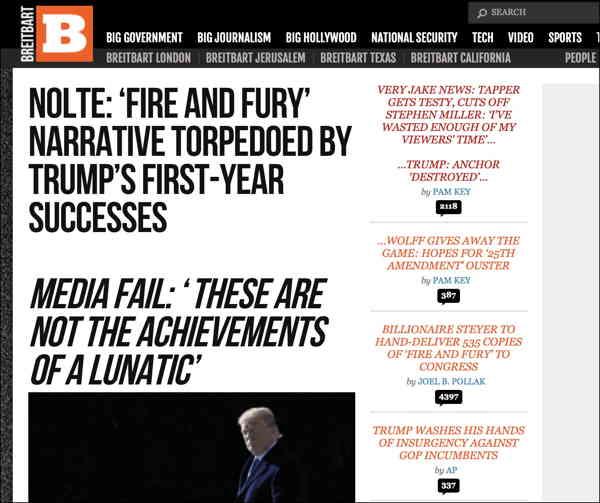 “Axios has learned that POTUS has said that he wants surrogates who appear for him on TV to ‘bury Steve,'” Axios reports, adding, “Axios’ Jonathan Swan reported last night: Trump has been working the phones over the past several days, telling allies they need to choose between him and Bannon.”

On CNN Sunday morning, White House policy advisor Stephen Miller had an unhinged meltdown attempting to attack Wolff, Bannon, and CNN. The President then applauded him via Twitter.

Bannon and Trump are like that super annoying on-again, off-again couple you dread running into at a party. pic.twitter.com/t00zMDV8Md

There are no heroes in Trump world. https://t.co/HLMT7qXknP

After five days of hammering from @POTUS and his allies, itâ€™s Bannon who â€œcracked like a soft egg.â€
Sloppy Steve just became Sorry Steve.https://t.co/JMV8LlZ4Fj

Steve Bannon Thinks People Are Trying to Assassinate Him. Also, Steve Bannon Is Thinking of Running for President.

Trump Scorches Former BFF Steve Bannon: When I Fired Him ‘He Lost His Mind’

Trump to Bannon: I’m Suing You

White House: Steve Bannon? Who? Oh, He and Trump Were Never Close.

Over the winter at least 151 Texans died as 4.5 million homes and businesses went without power in a massive failure created by poor planning, lack of regulation, and sheer greed.

Everything that needed to be done was done to fix the power grid in Texas.

Today, I signed bills into LAW to reform ERCOT & weatherize & improve the reliability of the state’s power grid.

On Monday, less than seven days later, ERCOT, the Electric Reliability Council of Texas, urged customers to turn air conditioning to no cooler than 78 degrees and to conserve power, as it expects more blackouts throughout the week – this time during extreme heat.

In a statement ERCOT also asked Texans to not use ovens, washing machines, or dryers.

“If you don’t need something – we are asking you to turn it off and unplug it if possible.”

BREAKING: ERCOT is now asking people to conserve electricity through Friday, saying there are a significant number of power plants offline and expecting possible record use for June. pic.twitter.com/zWZkf0bkPq

Many Texans, and many Americans, are furious.

Start with cutting power to the Governor’s mansion. Our grid isn’t fixed and the consumer is paying higher prices. But regulation is bad???#AbbottFailedTexas https://t.co/sODJ5CrfZ5

Thanks to @GovAbbott, on one of the first hot days, we’re already being told to conserve electricity.
They didn’t FIX the grid because they were too busy legislating women’s vaginas & stopping POC from voting.
VOTE @GregAbbott_TX out in 2022 to save TEXAS!!! #AbbottFailedTexas https://t.co/a97aR7DO2u

So now ERCOT ‘CAN’T HANDLE COLD OR HEAT’. Someone should check the flight logs to Cancun bc I’m sure Cruz is already on his way there. And fuck Abbott too #AbbottFailedTexas

…are you FREAKING KIDDING ME, Texas?!
ERCOT: Our grid wasn’t built for temperatures this cold!!!
ERCOT: uhm….it’s too hot! How could we ever have anticipated this! https://t.co/vlqcXW6wUN

What could go possibly wrong with a combination of Texas’s summer power outages and its new conceal-carry for all law?#AbbottFailedTexas

ERCOT has issued a new warning to Cancun that Ted Cruz might be back sooner than expected.

If you listen closely, you can hear Ted Cruz booking a flight to Cancun https://t.co/gmPLkaeMXi

ERCOT: there will be power outages! #AbbottFailedTexas it’s time for Beto to Run things… pic.twitter.com/FEIu7BiQLD

This wouldn’t be an issue if #Beto was #Texas’ Governor. #ercot #poweroutage https://t.co/5rKUHske5W

While Abbott prattles on about a bloody wall, we need our grid repaired now. This is going to a long, hot summer.

THE GOP IS NOW THE QANON PARTY

The FBI has briefed members of Congress that QAnon “digital soldiers” may become violent and engage in more acts of domestic violent extremism, like the January 6 insurrection. In an unclassified version of the threat assessment delivered to top lawmakers in April the Bureau warns that Democrats may be targeted.

Rather than walking away from the far right wing conspiracy movement that paints some top Democrats as part of a dark cabal of cannibalistic Satan-worshipping pedophiles being fought by Donald Trump, some QAnon cultists think “that individuals need to take greater control of the direction of the movement than before,” CNN reports in an exclusive.

The shift is fueled by a belief among some of the conspiracy’s more militant followers that they “can no longer ‘trust the plan” set forth by its mysterious standard-bearer, known simply as “Q,” according an unclassified FBI threat assessment on QAnon sent to lawmakers last week, which was obtained by CNN.

This might lead followers to seek to harm “perceived members of the ‘cabal’ such as Democrats and other political opposition — instead of continually awaiting Q’s promised actions which have not occurred,” according to the assessment.

CNN also reports FBI Director Christopher Wray “made clear the bureau is not investigating” the QAnon movement, but only crimes committed by its adherents.