Trump White House Senior Policy Advisor Stephen Miller pushed his usual fake outrage act too far for Jake Tapper on Sunday morning’s “State of the Union,” forcing the CNN anchor to cut short the interview. Miller has a record of going ballistic when appearing before news cameras, but Sunday’s act was astonishing.Â

Miller repeatedly characterized as “grotesque” Steve Bannon’s comments that appear in Michael Wolff’s bombshell book, “Fire and Fury: Inside the Trump White House,” which has dominated headlines for much of the week. Clearly Miller was dispatched by the White House to push backÂ forcefullyÂ on the highly-destructive revelations the book offers.

“The book is best understood as a work of very poorly written fiction,” Miller claimed. “The author is a garbage author of a garbage book,” which doesn’t help theÂ White House look in control.

Moments later, Miller twice accused Tapper of being “condescending,” which he called “part of your M.O.”

And then, strangely, as if he was legally entitled to it, Miller said he should be given three minutes to talk about Donald Trump.Â

â€œViewers are entitled to have three minutes of the truth. Why donâ€™t you just give me three minutes to tell you about the Donald Trump that I know?â€ Miller demanded.

Tapper, fed up, responded he wasn’t going to allow that, reminding Miller it actually is his show, and saying:Â “I donâ€™t want to do that,” further enraging Miller.

Miller acquiesced for a fewÂ seconds, but became combative again, forcing Tapper to end the interview.

â€œOkay, youâ€™re not answering the questions,â€ Tapper said. â€œI get it. Thereâ€™s one viewer that you care about right now and youâ€™re being obsequious because youâ€™re trying to please him. Iâ€™ve wasted enough of my viewers’ time.â€

When he returned from commercial, Tapper welcomed his viewers “back to earth.”

So outrageous were Miller’s remarks that he quickly became the top trending item on Twitter: 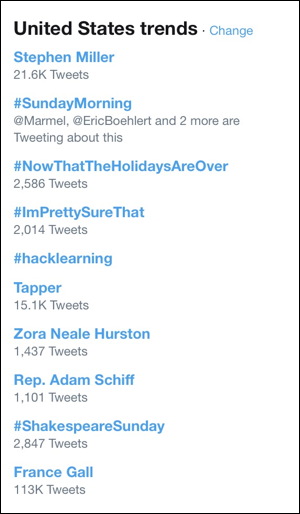 Miller is infamous for delivering a chilling defense of President Trump in the first weeks of his tenure, telling Americans, “Our opponents, the media and the whole world will soon see as we begin to take further actions, that the powers of the president to protect our country are very substantial and will not be questioned.”