Wednesday evening a Trump official from the Dept. of Housing and Urban Development called well-known reporter April Ryan “Miss Piggy” after a short but heated interaction on Twitter.

This is the tweet Patton posted to her personal Twitter account, including a photo of Ryan, a CNN political analyst and the D.C., bureau chief for American Urban Radio Networks. 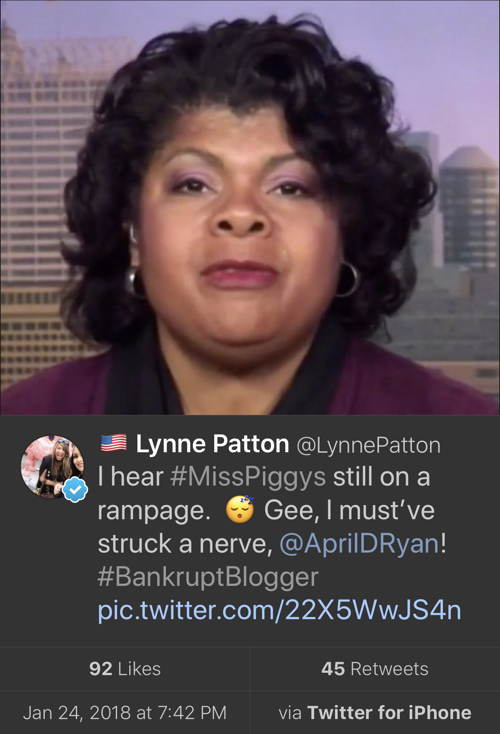 Lynne Patton first made headlines last year when she was hired by Secretary Ben Carson to head up one of HUD’s largest regions, encompassing New York and New Jersey. Reports made clear she had no previous relevant experience, but “began working for Trumpâ€™s son Eric in 2009 as the vice president of his foundation and as his primary aide,” The Washington Post reported in August.Â

“She was promoted in 2012 to be the Trump familyâ€™s senior aide and chief of staff, serving as the principal contact between the family members and all corporate partners, heads of stateÂ and high-end donors. Specifically, she worked for the Trump children, Donald Jr., Tiffany, Ivanka and Eric and his wife, Lara.”

36 minutes after posting her attack on Ryan, Patton deleted her tweet and posted this apology, which apparently includes aÂ photo of her speaking at the 2016 RNC convention:

I deleted my last tweet by choice. No one from this Administration contacted me. It was beneath me & I apologize to @AprilDRyan. My parents raised me to respect others & I regret my response. I apologize to them, @SecretaryCarson & the Trump family. They deserved better. pic.twitter.com/MOWkRhOLnN

Also ironically, that “working across the aisle” bit isÂ fantasy:

#SchumerShutdown: Today, I am reporting to my federal job in honor of Dominic D. Durden – a 911 dispatcher who was killed by an intoxicated illegal who had been deported multiple times. Everyday I will remind @SenateDems some families are separated forever – not just by borders. pic.twitter.com/Yu0BVF5paA

Patton may have deleted her “Miss Piggy” tweet but waited over an hour to delete the ones she posted before it. NCRM had already taken screenshots of them: 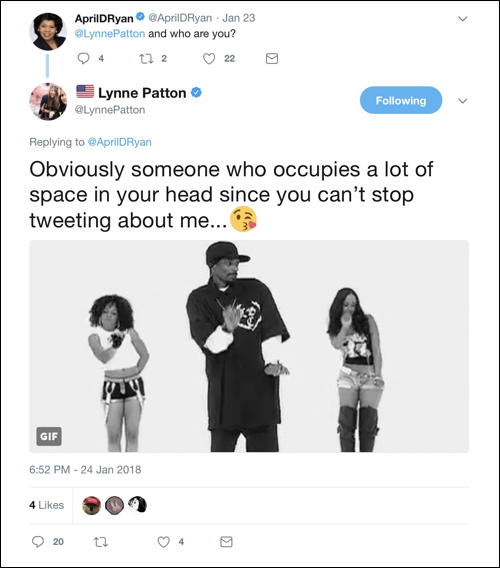 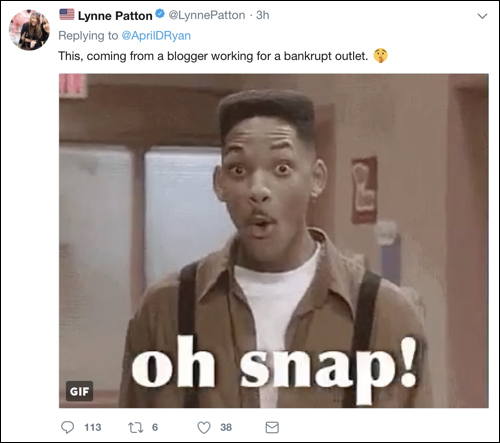 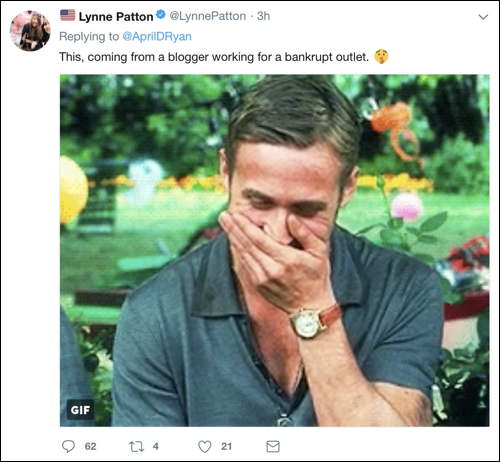 But her apology is not being accepted, at least not by many on Twitter. Calls are growing for Patton to resign â€“ or be fired. There’s also a #FIRELynnePatton hashtag.

You realize you have to resign right?

Hereâ€™s the tweet US government employee, @LynnePatton, posted fat-shaming @AprilDRyan and has since deleted. Good try, girl. We all saw it. pic.twitter.com/EHaJCXhp9i

You had no housing experience and you landed into your job because you are a complete Trump cronie and hack. For you to question anyoneâ€™s credentials is pretty freaking amazing.

Well don’t worry. I saved it for you… and the inspector general for HUD. pic.twitter.com/gKfA3aFW4d

You are unfit for public service. The very fact that you would tweet a sexist and likely racist attack on anyone, while working as a Trump appointee, shows that you are at best a child, and at worst a racist, sexist bigot. Apology not accepted. Resign. https://t.co/9itEGVyLWE pic.twitter.com/gZxMb3roAr

This is a member of HUD. Her experience? Being Eric Trumpâ€™s wedding planner. Now she too, is attacking journalists. #FireLynnePatton https://t.co/9IOgUlvmwG

This government employee whose salary we pay, is behaving like a bully and should be removed from her position!!! This is disgusting and shameful!!! #FireLynnePatton https://t.co/atkJ0CFH13

Fox News host Maria Bartiromo and former Trump administration official Stephen Miller worried over the weekend that Democrats will be in charge “forever” if voting rights are expanded or protected.

Miller argued that Republicans should pass laws protecting Chrisitians on social media as soon as the party regains control of government.

“Yeah, will Republicans have the chance?” Bartiromo agreed. “That’s the whole point of H.R. 1, Nancy Pelosi wanting to put this bill through so that Democrats are in charge forever or certainly decades. Your thoughts on election integrity and that Democrat [sic] H.R. 1 bill.”

“It’s a real sign of the threat to the health of our democracy,” Miller opined. “When democracy faces risk, when democracy is imperiled, what you see happening instead is the party in power tries to change the rules of the game structurally to stay in power.”

Miller argued that the voting rights bill is “a very dangerous path to go down.”

“H.R. 1 is saying, now that we’re in power, let’s fundamentally change the rules of how elections are conducted to stay in power,” he continued.

“That’s a very scary thing,” Miller said. “And so if you care about democracy, you should all say with one voice, no, it is the right of every state in this union to set their own election rules as desired by their own citizens to protect the security and integrity of their own elections. That’s fundamental!”

“It’s all quite extraordinary,” Bartiromo lamented.

On Saturday, Newsweek profiled a number of historians outraged at the effort by Rep. Marjorie Taylor Greene (R-GA) to create an “America First” congressional caucus that would defend “Anglo-Saxon political traditions.”

Grand View University associate professor of medieval history Thomas Lacaque did not mince words: “These American fascists have no relation to Anglos or Saxons, the terminology is clearly chosen on far right lines. They do remind me of Beowulf, though —violent, vain, boasting oafs who think killing is governance and will die doing dumb shit leaving the nation in ruins.”

“There is no such thing as ‘Anglo-Saxon’ political traditions’ unless Margorie [sic] Taylor Greene is talking about Old English charters and she isn’t,” wrote University of Toronto medieval scholar Mary Rambaran-Olm. “If she wants to return to those, she’ll have to stop advocating for gun use. ‘Anglo-Saxon’ is being weaponized by the far-right.” She added that the very term “Anglo-Saxon” is a “racist dog-whistle, inaccurate and generally sucks balls.”

The new caucus, which Greene co-founded with Rep. Paul Gosar (R-AZ) and has attracted membership interest from Reps. Barry Moore (R-AL) and Louie Gohmert (R-TX), has even drawn criticism from other Republicans.

House Minority Leader Kevin McCarthy (R-CA) responded to the news by saying, “The Republican Party is the party of Lincoln & the party of more opportunity for all Americans — not nativist dog whistles.” And Rep. Adam Kinzinger (R-IL), a frequent critic of Trump loyalists, has called for any Republican who joins the caucus to be stripped of committee assignments and expelled from the Republican conference.