Ugly Slurs, Praise for a Nazi. What Is the New York Times Trying to Tell Us?

The New York Times just announced it has hired Quinn NortonÂ as the editorial board’s lead opinion writer on the power, culture and consequences of technology.

.@quinnnorton has joined the @nytimes editorial board as lead opinion writer on the power, culture and consequences of technology. Read on in a note from @jbennet, @katiekings and @jimdao https://t.co/cASzLbrbB4 pic.twitter.com/groh0Si09M

Certainly an interesting position, and most people don’t know Quinn Norton, so they started to dig, where most people start to dig: Twitter.

As it turns out, Quinn Norton uses words like “fag,” and “faggot,” and “nigger.” “Fag” was a frequent favorite, apparently, for a few years: 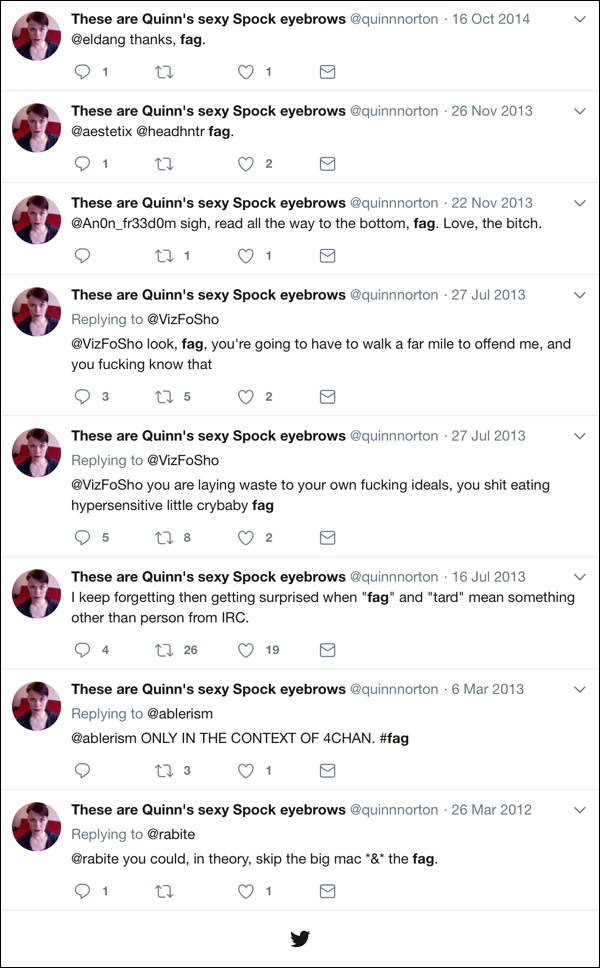 Also, she once wrote a piece offering praise to a Nazi. Here’s how it starts:

John Rabe is my personal patron saint of moral complexity. Rabe was a Nazi who died after the war in 1950, broken and poor. 76 years ago this week, he started a committee that led to him being known as a “living Buddha” in China. There is nothing higher that can be said of a person than this.

And then there’s this tweet, in which Norton admits being friends with Nazis:

This pretty much sums up what some are saying:

Hey @nytimes, your new tech editor Quinn Norton is friends with a guy who calls himself weev (https://t.co/hTf9KyU57p). Weev is a hacker who is a literal Nazi (https://t.co/lkJ0xJ14ww). Care to explain yourselves? Or is Richard Spencer your next hire?

Back in November The New York Times was accused of normalizing a Nazi sympathizer. The Times responded by saying: “What we think is indisputable, though, is the need to shed more light, not less, on the most extreme corners of American life and the people who inhabit them.”

Apparently now that includes hiring people who befriend Nazis too.

Hhhmm hard to imagine a context in which all these gay slur tweets are fine and good but maybe I’m missing something pic.twitter.com/3h61HcPnnB

Well, fuck. I spent my whole childhood hoping I’d write for the New York Times and now it feels like I… do not want to do that anymore. So that’s sad.

Readers: We hate this.

My feed seems to be pretty well divided between people who love Quinn Norton and people who are fixated on how she said she was friends with a Nazi 4 years ago and to be honest I donâ€™t know what to think, except that in general, one should not befriend Nazis.

If you thought that thread I shared where @quinnnorton talked about her neo-Nazi friends couldn’t get worse, well, I’m just as gobsmacked as you are by THIS. Yes, folks, the new NYT op-ed writer is happy to report the Nazis *maybe* won’t kill her because she got them to like her. pic.twitter.com/Y1k4YUfxXI

Oh, Iâ€™m sorry, @quinnnorton apparently isnâ€™t a Nazi *herself*, she just hangs out with them and thinks theyâ€™re awesome as long as they like you. My bad.

For the record, I was a fan of @quinnnorton‘s writing and reporting — and then I read her tweets about weev and neo-nazis.

They mean what they say, and they want to kill people.

Join me for another edition of WHAT THE HELL IS HAPPENING TO THE NEW YORK TIMES.

In this episode, the technology section gets a new editor and you’ll never guess what she’s into. Using gay and racial slurs and befriending Nazis!

Give a warm welcome to Quinn Norton. https://t.co/ehiQE8NPuY

UPDATE: 8:45 PM ET â€“
HuffPost reports a NY Times spokesperson has told themÂ â€œWe are very concerned about the tweets that are circulating today and are looking into the matter.â€

UPDATE: 10:20 PM ET â€“
The Daily Beast reports The New York Times has “fired” Norton. It’s actually not clear the Times “fired” her, rather, Norton posted on Twitter that she will not bet joining g the Times after all.

Regardless, The New York Times should not get a pass for this â€“ they continue to make bad decisions in hiring (Bret Stephens comes to mind). The Times “reporting” delivering a warm portrait of a neo-Nazi, and its hiring someone who is friends with neo-Nazis is beyond acceptable.

Democratic California State Senator Scott Wiener has received death threats from far-right supporters of the QAnon conspiracy theory after he introduced legislation to reform the state’s sex offender registry to be less queerphobic.

Right now, California law allows judges to refuse to list the full names of certain offenders from the sex offender registry if the judge finds a valid reason to do so—let’s say, for example, if an 18-year-old has sex with a 16-year-old. The rule only applies for offenders who have sex with minor ages 15 to 17 and it only applies to penis-in-vagina sex.

Wiener wanted to change the law to include all types of sex, and that’s when the death threats started pouring in.

Another wrote, “I’ll come cut your head off and deliver it to your mom if you even considering introducing your ‘bill.’ Got it?”

Others messages were anti-Semitic or accused Weiner of being a child rapist. Because it’s against the law for elected officials to block users on social media, all of his social media channels have to remain open to such threats.

The QAnon conspiracy theory believes that the Trump administration will expose a top-secret international child sex trafficking network run by “deep state” senior Democrats who are determined to stop Trump at all costs. Its theories infamously led an armed gunman in 2017 to enter a gay-owned Washington D.C. pizza parlor, Comet Ping Pong, to investigate “Pizzagate,” the claim that the pizzeria had child sex slaves locked in its nonexistent basement.

QAnon conspiracy theorists have become more active during the COVID-19 lockdown and the runup to the November 3 presidential elections as many U.S. residents find themselves at home without jobs.

“Whether its QAnon or Russian troll farms, these are factories of false info designed to undermine democracy and public discourse, and also to send a message to elected officials that if you pursue unpopular progressive change to help marginalized groups like queer kids, ‘We’re going to target you,'” Weiner told Mother Jones.

Before a meeting of the road commission started last Tuesday, Eckerle was asked by a commission member why he wasn’t wearing a mask. He responded, “Well this whole thing is because of them (n-words) down in Detroit.”

When Bob Joyce, the commission’s chair, told Eckerle he couldn’t say that, Eckerle said, “I can say anything I want. Black Lives Matter has everything to do with taking the country away from us.”

Let’s be clear: the social aims listed on the Black Live Matters (BLM) website do not mention white people. According to its website, the BLM movement seeks to unite Black communities worldwide to oppose state-sanctioned violence and anti-Black racism while also create creating healing, empathetic communities free from prejudice.

“If I could get a few people that, when they see a Black Lives Matter sign up, to think the N-word, I have accomplished what I’m after,” he added.

Eckerle was elected to his eight-year position in 2018. Of Leelanauhas County’s 21,700 residents about 90 percent are white. Black people are less than 1 percent of its population.

In a memo released yesterday, President Donald Trump ally Louis DeJoy — who was hired by Trump’s handpicked Postal Service Board of Governors — reshuffled two top executives and 21 to 31 other executives and staffers who represent “decades of institutional postal knowledge” out of leadership roles or into new positions in the U.S. Postal Service (USPS).

This move, along with other recent “cost-saving” measures which have slowed down mail delivery and threatened to worsen the service, comes as an unprecedented wave of mail-in ballots are expected in the November presidential elections as voters avoid in-person polling stations to reduce possible COVID-19 exposure.

The USPS was already in financial trouble because of a 2006 law requiring it to pre-fund 75 years worth of retirement benefits — a $110 billion cost. Also, like many U.S. businesses, the epidemic significantly harmed the USPS. Many workers fell ill or began quarantining, causing USPS leaders to spend millions on personal protective equipment, plexiglass and social distancing equipment for offices while its reduced workforce began working overtime at increased pay to help continue services.

These moves are allegedly meant to help the USPS stay financially solvent as it’s expected to run out of money anytime between March and October 2021, despite the recent approval of a $10 billion Treasury loan approved in the upcoming coronavirus relief package.

The moves are also eyebrow-raising seeing as DeJoy and his wife have between $30.1 million and $75.3 million in assets in USPS competitors and contracts who might directly benefit from the USPS’s failure.

People suspect Trump of deliberately sabotaging the USPS as a way to try and sway the upcoming November elections in his favor. Trump, who has repeatedly and falsely claimed that mail-in voting increases voting fraud, wants to deny the service billions in federal aid unless USPS quadruples its prices, something that would compel people to use USPS competitors.

The Trump campaign has sued state and local governments nationwide over mail-in ballot rules, and according to Vox.com:

Different states have different laws about how mail-in ballots work. Currently, 34 states — including swing states like Arizona, Michigan, Minnesota, Pennsylvania, and Wisconsin — require ballots to be received by election authorities by Election Day, so any delay in the mail could lead to untold numbers of votes going uncounted.