The Trump administration is preparing new policy to enable health care workers claiming religious or moral objections to discriminate against transgender patients, or to refuse to perform or assist in performing abortion services. According to Politico the new rule could be announced in time for Friday’s March for Life, an annual anti-choice rally held in Washington, D.C., organized in part by the religious right to drive support for overturning Roe v. Wade.

Roger Severino, Trump’s highly controversial Director of the Office for Civil Rights (OCR)Â at the Department of Health and Human Services, reportedly is spearheading a reorganization ofÂ the division to enforce compliance and dole out punishments to organizations that might violate the new protections.Â

Not only would this new office “punish organizations that donâ€™t allow” health care workers “to express their moral objections,” but it would “also conduct outreach and technical support to help others who are seeking to strengthen protections for these workers,” Politico reports.

In other words, a taxpayer-funded arm ofÂ the federal government might actively partner with, for example, the Family Research Council to help undermine the civil rights of transgender patients or women seeking abortion services. It could be like OSHA but instead of ensuring safe working conditions it would ensure health care workers are allowed to discriminate against transgender people and women seeking abortions.Â

Just days agoÂ the complaint portal website for theÂ Office for Civil Rights at the Department of Health and Human Services was updated to include greatly expanded language on Federal Conscience and Religious Freedom Laws.

Here’s a screenshot of the page on January 13: 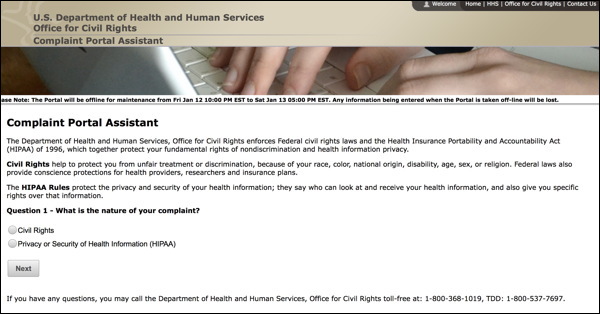 Here’s a screenshot of the page today: 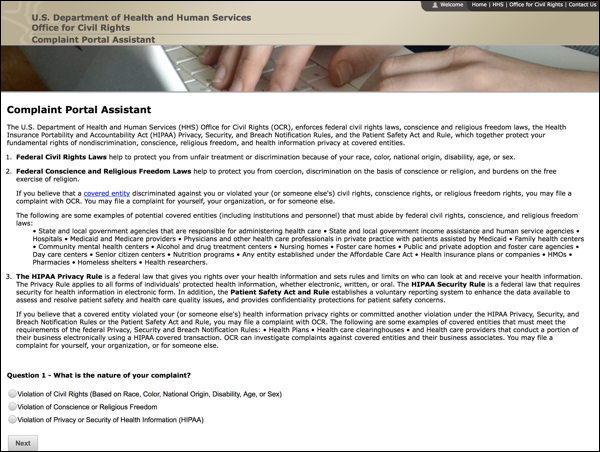 The updated page includes an entirely new category of complaint:Â Violation of Conscience or Religious Freedom.

Severino has a history of anti-transgender positions, notably when he was the Director of the DeVos family’s Center for Religion and Civil Society, Institute for Family, Community, and Opportunity at The Heritage Foundation. He also served asÂ legal counsel for the right wing Becket Fund for Religious Liberty.

Politico adds that Severino “has repeatedly stressed that strengthening conscience protections for health care workers is a top priority for his office.”

“Severino has called the efforts of agencies such as OCR to protect transgender people from discriminationÂ an ‘abuse of power‘ wielded ‘to coerce everyoneâ€¦into pledging allegiance to a radical new gender ideology,'” a joint statement signed by eight progressive and LGBT civil rights groups charged.

UPDATE â€“
The DNC is blasting the Trump administration over this move:

“Once again, women and the LGBTQ community are under attack from the Trump-Pence administration. Days before the anniversary of the Womenâ€™s March, Republicans are giving health workers a license to discriminate against women and members of the LGBTQ community,” DNC Director of Womenâ€™s Media Elizabeth Renda and Director of LGBTQ Media Lucas Acosta tell NCRM in an email statement.Â

“It wasnâ€™t enough to try to strip transgender Americans of their right to serve, roll back access to birth control, and attempt to defund Planned Parenthood. Now Trump, Pence, and their Republican cronies want to allow health care workers to discriminate and rip away access to medical care. This rule is unethical and dangerously undermines public health.”Â

â€œThis proposal is further proof that Republicans continue to push forward an agenda completely out of step with the American people and American ideals. Democrats will continue to focus on how to improve access to health care for all Americans regardless of gender, orientation, or income.â€

On Sunday, the editorial board of the St Louis Post-Dispatch called on the U.S. Senate Ethics Panel to investigate Sen. Josh Hawley (R-MO) over any possible involvement he may have had in the Jan 6th insurrection at the U.S. Capitol.

Hawley, whose political future will be haunted by a photo of him giving a raised fist to insurrectionists as they stormed the halls of Congress has been excoriated by the paper’s editors multiple times, but Sunday’s call for an investigation ramps up their attacks on the home state senator.

According to the board, “Ten months after a group of Senate Democrats lodged ethics complaints into the conduct of Republican Sens. Josh Hawley of Missouri and Ted Cruz of Texas regarding their roles in sparking the Jan. 6 attack on the Capitol, the Senate Ethics Committee has shown no sign of movement.,” with the editors saying it is “long past time” to take a hard look at both Republican senators.

“Jan. 6 wasn’t a fantasy; it was real, and the culpability of these two senators must be determined,” they wrote. “Hawley and Cruz were the only two senators to object to certification of Joe Biden’s clear victory in the 2020 election results, citing (with zero evidence) supposed concerns about the election’s integrity. That was the same baseless, toxic nonsense then-President Donald Trump had been spewing since before the election. Such talk whipped up the mob of Trump loyalists to attack the Capitol on Jan. 6.”

Adding, “Even after the violence, he persisted in voting with just five other senators to continue promoting Trump’s big lie that Biden’s win was illegitimate,” the editors wrote, “If he had an ounce of honor, he’d have heeded our Jan. 7 call for his resignation (we certainly weren’t alone on that). But at this point, why even talk about honor?”

Writing that, “Just because there’s a mechanism in place allowing senators to object to election results doesn’t mean it’s OK for Hawley to abuse that process for crass political gain,” the editorial concluded, “Hawley and Cruz have the right to defend themselves from the allegations — but so far, they haven’t even had to. The Ethics Committee should stop sitting on this.”