The age ofÂ Trump has ushered in a drop in the acceptance of LGBTQ people by Americans along with a dramatic double-digit increase in reports of anti-LGBTQ discrimination, according to a new Harris Poll commissioned by GLAAD.Â

This is GLAAD’s fourth annual Accelerating Acceptance report and the first to find that fewer Americans say they are comfortable with LGBTQ people in public, in schools, and in places of worship.

“Less than half of non-LGBTQ adults (49 percent) reported being ‘very’ or ‘somewhat’ comfortable with LGBTQ people across seven situations. This is a significant decline from 53 percent last year and the first time the Accelerating Acceptance report has shown a drop in acceptance for LGBTQ people,” GLAAD notes.

According to the poll, taken in November of 2017, three in ten Americans (30%) now say they are very or somewhat uncomfortable with learning a family member is LGBT, up from 27% over the prior two years.Â 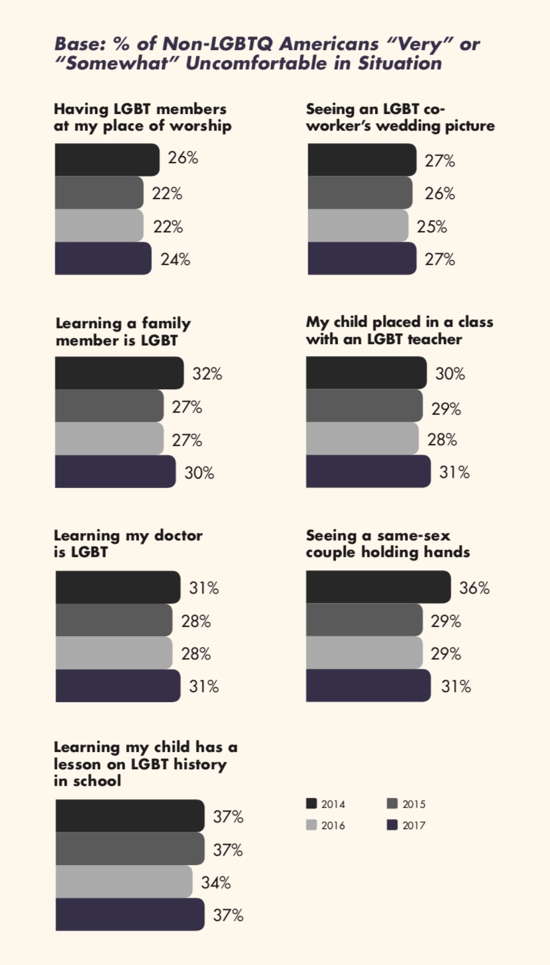 More than one-third of Americans (37%) say they are uncomfortable with learning their child has a lesson on LGBT history in school, up from 34% in 2016.Â

31% say they would be uncomfortable learning their doctor is LGBT, or their child had an LGBT teacher, a 3-point increase over the prior year.

And 31% of Americans say they are uncomfortable seeing a same-sex couple holding hands, up from 29% in 2016. 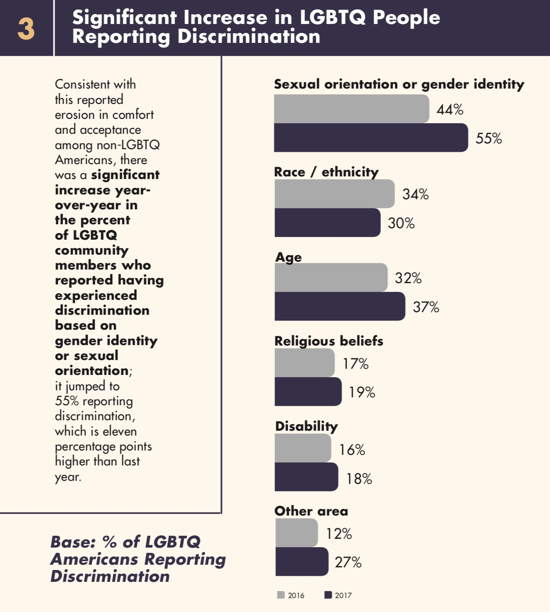 55% of those surveyed say they experienced sexual orientation or gender identity discrimination. That’s an increase of 11 points, up from 44% over 2016.

â€œIn the past year, there has been a swift and alarming erosion of acceptance which can only be fought by being visible and vocal,â€ GLAAD President and CEO Sarah Kate Ellis said in a statement. â€œThis report puts numbers to the bias that too many LGBTQ Americans have recently experienced. GLAAD is fighting the rollback by enlisting philanthropic leaders like the Ariadne Getty Foundation and global changemakers attending the World Economic Forum to use their platforms and move our community forward.â€

Image by Alan Light via Flickr and a CC license

Conservative broadcaster Steve Bannon admitted on Wednesday that he had plotted with President Donald Trump to “kill the Biden presidency in the crib” ahead of the Jan. 6 attack on the U.S. Capitol.

During his Warroom broadcast, Bannon played clips of journalist Robert Costa and Bob Woodward explaining how events unfolded prior to the Jan. 6 riot.

“You look at January 5th, we discovered that Steve Bannon, the former White House strategist, was there at the Willard Hotel blocks from the White House with Rudy Giuliani, having an almost war-room-type meeting with other Trump allies the eve before the January 6th insurrection,” Costa recently explained to MSNBC. “And Bannon had actually been in close touch with President Trump for days before January 6th. Based on our reporting, he privately told President Trump to have a reckoning on January 6th. And he said to the president, it’s time to kill the Biden presidency in the crib.”

Bannon seemed proud to confirm that the conversation had taken place.

“Yeah, because his legitimacy,” Bannon said of Biden. “42% of the American people think that Biden did not win the presidency legitimately.”

Watch the video below from Real America’s Voice.

A right wing mega-church pastor who falsely claims Donald Trump won re-election “by about 80 million votes” says more Christian children than ever before identify as LGBTQ, making clear he believes that is bad.

Pastor Kent Christmas, who shares his ministry with his wife Candy, appeared on stage before thousands of his followers and declared, “never have Christians’ children been more taken over by homosexuality, than they are right now,” as Right Wing Watch reports (video below).

The vast majority of Americans support same-sex marriage and equal rights and responsibilities for LGBTQ people.

Christmas blamed a “demonic spirit that comes after our seed” for the increase in people who identify as LGBTQ.

“If I asked each and every one of you to stand that has a son, daughter, or a niece or a nephew, or a brother or sister, that is gay, half of you would stand up in this building, because it is a demonic spirit that’s come after our seed and the church that God has raised it up in this hour is going to have authority over that.”

In 2018 Christmas acknowledged his son is gay, and said, “I know that he wasn’t born that way.”

He claims his son is no longer gay, and is now married with a wife and children.

“I watched the Holy Ghost deliver him and set him free,” Christmas said.

It goes on to reveal that more than eight out of ten Americans who were subjected to dangerous conversion therapy “received it from a religious leader.”

Right-wing pastor Kent Christmas says that Christian children are being “taken over by homosexuality”: “It is a demonic spirit that has come after our seed.” pic.twitter.com/dKWlSZNTne

He hasn’t even been confirmed yet by the Florida state Senate but Dr. Joseph Ladapo, Governor Ron DeSantis‘s new Surgeon General, on Wednesday signed an executive order that changes state policy on school attendance for students who have been exposed to COVID-19.

The order, which replaces an August 6 order by Dr. Ladapo’s predecessor, declares that students who have been exposed to COVID-19 can continue attending school in-person, as long as they are asymptomatic. It also repeatedly states that parents have sole discretion on how children are educated – in person or virtually – and on masks, effectively eliminating any locally-ordered mask mandates.

“The school boards in Miami-Dade, Broward, Orange, Alachua and Leon counties [had] challenged the Aug. 6 rule, which did not include the new provision about parents or legal guardians having ‘sole discretion’ about opting out of school mask requirements,” the Tallahassee Democrat newspaper reports.

Those lawsuits are now effectively null and void because of the new order.

Dr. Ladapo, who opposes mask and vaccine mandates, has likened the focus on getting Americans vaccinated to a religious obsession, and supports treatment of COVID-19 with drugs that are neither approved for use against the coronavirus nor have been proven to be effective – namely the livestock-dewormer Ivermectin and the malaria-drug hydroxychloroquine. He also appeared in the infamous viral video with a discredited doctor mocked as the “Demon Sperm” physician.