President Has Praised Charlie Kirk in the Past

Here are the posts Trump retweeted: 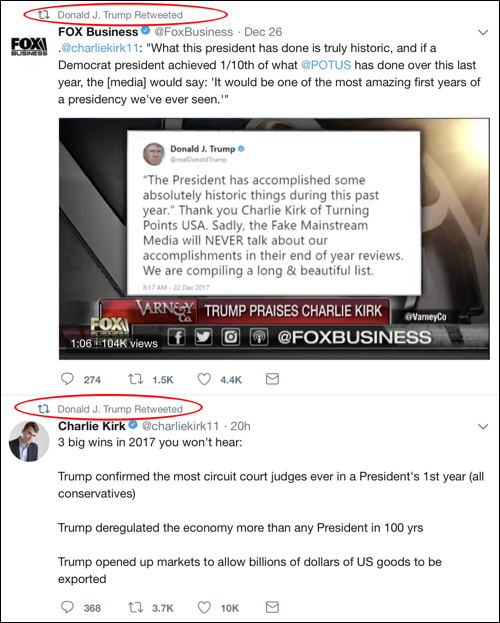 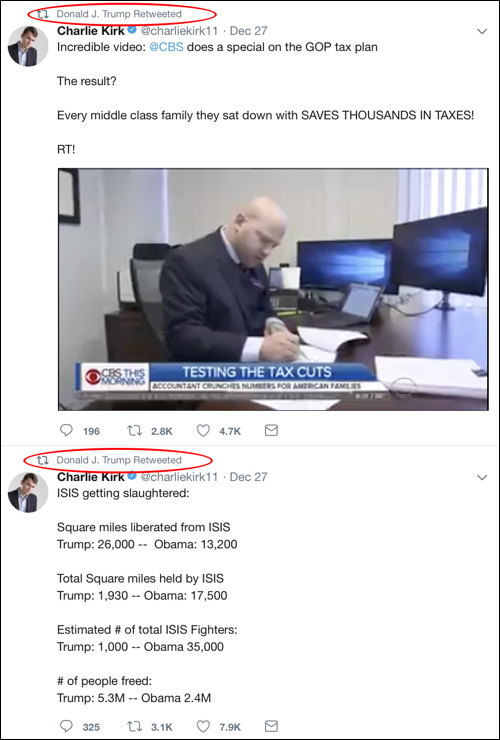 Turning Point touts its close relationship with the Presidentâ€™s family. The groupâ€™s Web site promoted Don, Jr.,â€™s appearance for weeks, featuring a photo of him raising a clenched fist. Its promotional materials include a quote from the younger Trump praising Turning Point: â€œWhat you guys have doneâ€ is â€œjust amazing.â€ Lara Trump, the wife of Don, Jr.,â€™s brother Eric, is also involved with the group. In West Palm Beach on Wednesday, she hosted a luncheon promoting Turning Pointâ€™s coming Young Womenâ€™s Leadership Summit. The groupâ€™s twenty-four-year-old executive director and founder, Charlie Kirk, told me that he counts Don, Jr., as â€œa personal friend.â€

In The New Yorker, Mayer also reports that “Crystal Clanton, who served until last summer as the groupâ€™s national field director, sent a text message to another Turning Point employee saying, ‘i hate black people. Like fuck them allÂ .â€‰.â€‰.Â I hate blacks. End of story.'”

Media Matters reportsÂ thatÂ earlier this year Kirk “made an appearance on Fox Newsâ€™ Hannity with Eric Trump and Donald Trump Jr. to discuss how college campuses are ‘islands of totalitarianism & intolerance’ for students with ‘conservative or freedom beliefs.’ Kirk has publicly aligned himself with Milo Yiannopoulos in the past, and college chapters of Turning Point USA sponsored several stops on Yiannopoulosâ€™ ill-fated campus harassment tour earlier this year. Turning Point USA is also closely affiliated with the dangerous ‘citizen journalist’ vigilante work of James Oâ€™Keefe and Project Veritas, and the group recently delved into its own warped citizen journalism project with the launch of a McCarthyistÂ ‘Professor Watchlist’ project in late 2016.”

â€œThe President has accomplished some absolutely historic things during this past year.â€ Thank you Charlie Kirk of Turning Points USA. Sadly, the Fake Mainstream Media will NEVER talk about our accomplishments in their end of year reviews. We are compiling a long & beautiful list.